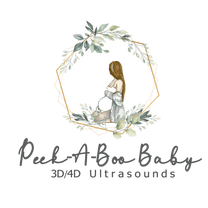 WHAT IS AN ELECTIVE 3D/4D ULTRASOUND?

Elective 3D Ultrasounds are a non-diagnostic ultrasound which provide three dimensional images of that bundle growing inside of you. The images are captured rapidly and animated through the use of sound waves in order to produce what is often called a "4D Ultrasound".

2D Ultrasounds are the traditional black and white screen ultrasounds that you usually see when you have your diagnostic scans performed at your Physician's office. The two dimensions used are that of height and width.


3D Ultrasounds also use those two dimensions, but in addition to this, they add the dimension of depth. This is why we're able to get "underneath" areas that cannot traditionally be viewed in only 2D mode (ie: gets us under baby's bum when performing gender determinations, where 2D ultrasounds are unable to see).


4D Ultrasounds use all three of those dimensions too, but they also add the dimension of time, or movement. When viewing an ultrasound in 4D, you'll see the real-time, incredible movements of your baby and often see them kicking, waving, sucking their thumb, and even smiling! Believe us, once everyone sees what baby's got going on in your tummy, you might just begin getting a little more TLC at home!

3D/4D Ultrasound utilizes sound waves to look inside the body of expectant mothers. Extensive studies have been performed over four decades and have not found to cause any harm to either the expectant mother or child. Ultrasound scans have actually become routine across North America, although regular 2D scanning cannot provide the image quality and sophistication as that of 3D.

WHEN IS THE BEST TIME TO HAVE A 3D ULTRASOUND PERFORMED?

Best images are usually obtained during weeks 24 and 34 of pregnancy. Dependent on the baby's growth and development, earlier scans may produce results of your baby who is less developed and so their features are not as fully defined as when a later scan is performed. Performing a scan during weeks 24 and 34 of pregnancy usually produces a fantastic image, which is of close-likeness to that of when your baby is born. Performing a scan much later in the third trimester may pose to be difficult, because the baby is nearing birth-size and therefore it is difficult for the camera to catch a full face or body image, as they may have already grown too big for the scan screen!

WHEN WILL YOU DETERMINE THE BABY'S GENDER?
The accuracy of a gender determination rises significantly around the 18 week mark. Because there is usually up to a one-week variance in the pregnancy, we can have you come in during your 17th week to get that ever-important answer!

WHAT IF WE ARE EXPECTING TWINS / MULTIPLES?

With multiples, results are much more optimal when you visit us a little earlier in the pregnancy. We recommend that you come in between weeks 24 and 29, in order to ensure that the babies have enough room to maneuver should one, both, or all, be in an unfavourable position. Even with Ultrasound, we must admit, two babies are two times the fun.... but not the cost (well, here anyway).  There is no additional charge for multiples.

DO I NEED AN APPOINTMENT?
Yes, please! Our flexible schedules are sure to accommodate yours, as we are open weekdays, evenings and even Saturdays! We have a number of ladies on staff, who just happen to be mommies themselves, so we understand that it can be difficult scheduling around everyone and everything. Please Contact our Office to make your appointment and we'll do our best to make it work with your schedule!

HOW LONG WILL THE APPOINTMENT TAKE?
Our Package Sessions usually take between 30 minutes and an hour. Other services, however, can take much less time than this. For example, should you do a Gender Determination only, this could take as little 10 minutes. For each of our services, please keep in mind that we are absolutely prepared and happy to take the time necessary in order for you to get the results that you are looking for. We book a sufficient time frame for each of our mommy's-to-be, so you'll never be rushed in, or out! Your satisfaction is important to us and we guarantee that will treat your pregnancy as if it were our own!

IS THERE ANYTHING I SHOULD DO TO PREPARE FOR MY APPOINTMENT?
There are no mandatory steps that you need to take in order to prepare for your appointment, but we suggest drinking a few glasses of water and/or eating something sweet about 15-20 minutes before your appointment time. Doing so usually makes the baby more active, which can result in better images and movements recorded on your DVD. And now for the best news..... you DO NOT require a full bladder, YAY!

CAN I BRING MY FAMILY AND FRIENDS?

Please do! If you would like to share your experience, we have the atmosphere for you to do it. Our Studio is equipped with a big, comfy, massage bed for you to lie and relax on, as well as leather chairs for your guests. We even have a toy box and play area for big brothers and sisters-to-be!

WHAT IF WE CAN'T GET AN IMAGE OF MY BABY (IS LOOKING AWAY THE WHOLE TIME)?
Come back! As we've said, your satisfaction is our Number 1 and we strive to provide you with results that you are happy with. If we are unable to obtain an image of your baby's face or body due to the baby being in an unfavorable position or otherwise, we'll repeat the scan another time (of course at no additional charge) so that the results are successful and you are happy with what you see!

DOES THIS TAKE THE PLACE OF AN ULTRASOUND AT MY DOCTOR'S OFFICE?

No. Peek-a-Boo Baby is an elective ultrasound imaging facility. We require that all mothers are under Physician care and have had their diagnostic Ultrasound and results from their Physician prior to visiting our Studio. Expectant mothers must already be receiving treatment from a Medical Doctor or healthcare provider. These specialists will provide the mother with information such as thier due-date, any pregnancy related issues and they will additionally screen for fetal anomalies.

MY DOCTOR MAY BE ABLE TO PROVIDE ME WITH A 3D PICTURE, WHY SHOULD I VISIT YOU?

Typically, your Doctor is scanning for diagnostic purposes only and as such, their attention is not focused on getting you the best image possible. They want to make sure that mommy and baby are doing okay, and that's absolutely what we want them to be doing.


At Peek-a-Boo Baby, quality images IS our focus! We strive to provide you with the best, quality images that you can share with your friends and family, (who are also welcome to share in your personal experience by attending your appointment along with you). We promise you, that you will have our 100%, undivided attention, as we are focused on providing you with a service and results that you'll be absolutley thrilled with!

WHAT ARE YOUR METHODS OF PAYMENT?

ARE YOUR ULTRASOUNDS COVERED BY INSURANCE OR HEALTH CARE?
In most cases, unfortunately not. Because this is an elective service, it is also considered to be for entertainment purposes only. Insurance and healthcare plans will usually not pay the costs associated with this type of Ultrasound and so it's an expense that you must personally incur (but we assure you, it's worth every bit!). We have, although, had some lucky families tell us that their private healthcare plans HAVE covered the costs, so it's definitely worth a shot and if you'd like a receipt to submit, we'd be happy to provide one to you!

OK, I'M IN! WHAT ARE YOUR HOURS AND HOW DO I BOOK?

Ultrasounds at Peek-a-Boo Baby are scheduled by appointment only. We are open Monday to Saturday and evening appointments may be arranged.

You may book your appointment by giving us a call at 587-877-7335 or by emailing us at info@pkboo.ca  or just click the button, below!

Please Contact our Office to make your appointment today!